• Wrestling
The Braves extended their duel winning streak to 49 as they went 7-0 at the Trojan Border Wars in Casper, Wyoming over the weekend. The Braves defeated Natrona County 48-16 before knocking off Hardin (Mont.) by the score of 58-18. They wrapped up Day 1 with a 60-20 victory over North Platte (Neb.).

The second day of the tournament was more of the same for the Braves who woke up Saturday morning and defeated Teton (Idaho) with a 71-12 score. The team then knocked off the perennially powerful Douglas Bearcats 56-24, setting up a huge duel with Rapid City Central out of South Dakota. The Braves started off with a 2-1 decision for Josh Dawson and went on a streak of six straight victories in the middle of the duel from 132 pounds to 170 pounds in a 42-25 victory. Star Valley wrapped up the tournament championship by beating the host Trojans 58-12.

Josh Dawson at 220 pounds and Tyson Hoopes at 138 pounds went undefeated over the weekend. Dawson has yet to lose in a Star Valley singlet and could be the first Brave to be undefeated in back-to-back seasons since Rick Wolfley who accomplished the feat back in 2004-05 & 2005-06.

The wrestling team also sent a small contingent to the Madison Invitational in Rexburg, Idaho over the weekend were the team finished 13th with 51.0 total points.  Placers from the Madison event included David Castillo (4th at 170), David Walker (6th at 182) and Brennan Harris (6th at 195).

On the boys side the top finishes for the day included Jackson Tully in the 60-meter (6th), Wyatt Peck in the 200-meter (2nd), Haydn Nielsen in the pole vault (3rd), Thomas Harnack in the long jump (5th) and Cosmo Morgan in the shot put. Asefa Wetzel easily won the 1-mile event with a time of 4:29. The quartet of Tully, Dustin Brown, Wetzel and Peck won the 4 x 400 meter relay.

• Basketball
The Lady Braves fell behind 15-4 in the first quarter and could never overcome the original deficit as they lost to the Evanston Lady Red Devils 46-36. Emmery Wagstaff led Evanston with 16 points and hit four, three-point baskets during the first half. Hailey Barker finished with nine points and Taylor Groll had eight. Star Valley was led by Olivia Muir who finished with 11 points and six rebounds. Caitland Erickson chipped in seven points and Shay Erickson had six points.

The Braves faced off against former teammate, Chase Critchfield, as the Devils came to town. Evanston had an 18-11 lead after one but Star Valley refused to go away, even after trailing by 16 points in the second quarter. The Braves cut the lead to six points on two different occasions but eventually fell in a 56-46 game. Braxton Hiatt had 23 points for Evanston and Critchfield finished with 15. Star Valley got 10 points from Payton Erickson before he fouled out late in the fourth quarter. Andrew Jeske had eight and Chase Merrell and R.J. Cazier each had six points in their first varsity action of the season.

CLICK HERE TO WATCH THE GAMES FROM AFTON BETWEEN EVANSTON & STAR VALLEY. 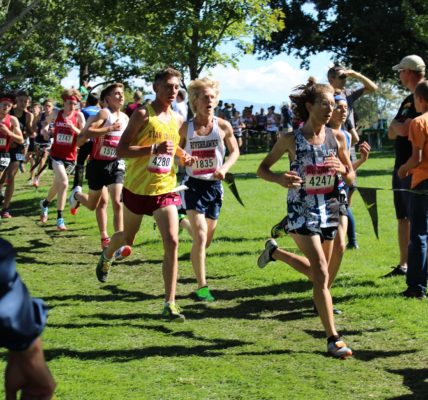 Harriers back in action at Rock Springs event