The following is from the Bonneville County Sheriff’s Facebook page. This rest area is located between Ririe and Swan Valley.
***UPDATED***
Bonneville County Sheriff’s Deputies are seeking the public’s help as the investigation of a man found at the Lane Clark Rest Area on Hwy 26 East of Ririe continues. Deputies were called to the rest area at 6:30am this morning, where they discovered 36 year old Morey P. Pelton of Jefferson County had been killed.
Deputies are asking anyone with information about this crime, or anyone who was in the area of the Lane Clark Rest Area on Hwy 26 (approx. Mile Post 356) between 8:00pm last night (May 12th) and 6:30am this morning, to contact Deputies immediately by calling 208-529-1200. Tips and information can also be sent to Crime Stoppers online at www.ifcrime.org or through the P3tips app on your mobile device, or by calling the Idaho Fusion Center Hotline at 1-833-445-2092.
Crime Stoppers has offered a $5000 reward for information leading to the arrest of individual(s) involved in this crime. 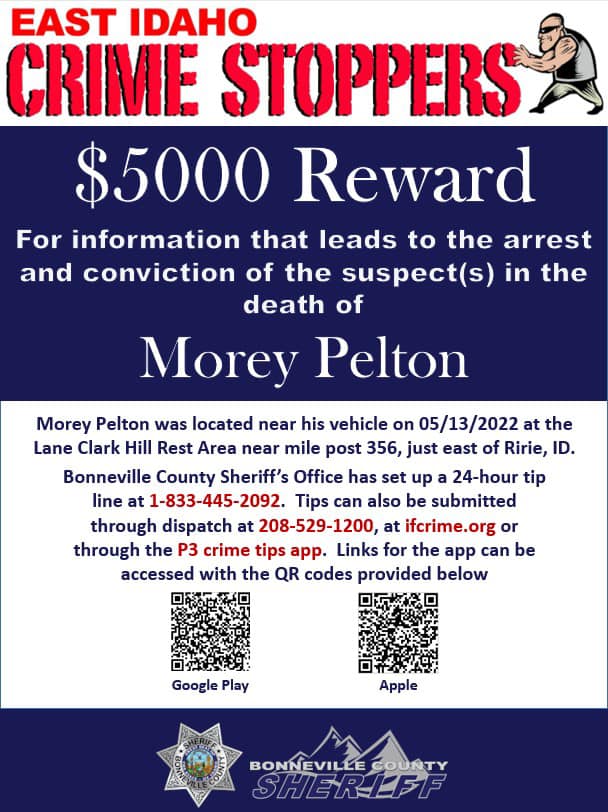 ***ORIGINAL POST***
Bonneville County Sheriff’s Deputies are investigating a suspicious death at the Lane Clark Hill Rest Area on Hwy 26 (Approx. Mile Post 356) East of Ririe.
At 6:30am Friday morning dispatch received a report of what appeared to be a deceased subject near a parked vehicle in the parking lot.
A large portion of the Rest Area is closed at this time while Detectives collect evidence and process the scene. The Bonneville County Coroners Office is also assisting at the scene.
The Sheriff’s Office is asking for anyone with information or anyone who may have been in the area between 4:30pm last night (May 12th) and 6:30am this morning to contact our dispatch at 208-529-1200, report anonymously through Crime Stoppers at www.ifcrime.org or on the P3tips app on your mobile device, or contact the Idaho Fusion Center Tipline at 1-833-445-2092.

The investigation is ongoing and further information will be updated at a later time.