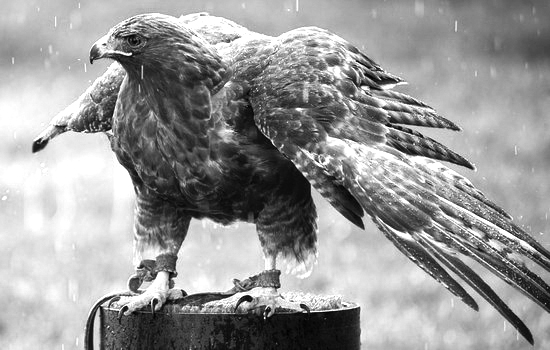 A district court judge has affirmed the county’s approval of the Teton Raptor Center’s expansion plans despite a legal challenge from neighbors.

“This opinion from the district court is a great victory for wildlife, ultimately,” Raptor Center Executive Director Amy McCarthy said.

The ruling means the raptor education, research and rehabilitation nonprofit can move forward with adding and improving buildings — something the nonprofit had been doing on its 27-acre Wilson property since it received initial approval for its expansion plan from the Teton County Commission.

“Throughout the judicial review process we’ve continued to move forward with the approved site improvements that are helping to preserve local history and advance our work of raptor conservation,” McCarthy said.

The nonprofit’s site is home to the Hardeman Barns, a complex of historic structures that date back to 1943. The site, along with more than 100 acres of open meadows to the east, was conserved by the Jackson Hole Land Trust in 1989, sparing it from development as a dense subdivision.

The Raptor Center has occupied the property since 2008, when Teton County granted a conditional use permit with several exceptions to regulations that allow it to operate.

In 2017 the Raptor Center purchased the property and applied to amend that permit. The amended permit allows the organization to remove and relocate some historic structures, upgrade others — including the famous Gothic-style north barn, transforming it into an educational programming site — and construct new buildings, like a new administration building, employee housing, raptor mews and a flight chamber.
The plan plans to add 2,837 square feet, increasing the total development to 19,524 square feet. It calls for removing 9,984 square feet of buildings and construction of 12,821 square feet.

Teton County commissioners held three public hearings on the redevelopment plans, listening to hours of public comment, both from fans of the nonprofit who support the expansion and neighbors worried about increased traffic, threats to wildlife and impaired views.

The board approved the updated permit unanimously in March 2018, adding restrictions that cap the number of people allowed at the property to 150 and limiting hours of operation.

About 15 neighbors and members of the Hardeman family filed an appeal of that approval about a month later, arguing amendments to the 2008 permits weren’t allowed under county regulations and adversely affected neighboring landowners.

“The proposed development of the [Teton Raptor Center] property does not fit the requirements of the Teton County land development regulations and will increase noise and traffic and impact views, safety and wildlife in ways that adversely impact the petitioners’ properties and the values of those properties,” the suit read.

Day found only four of about 15 neighbors who filed the appeal had appropriate standing, and ultimately ruled backing the commissioners’ approval of the expansion plan.

While the outcome of the suit was pending for more than a year, the Raptor Center went ahead with construction, which has mostly been upgrades to infrastructure, McCarthy said, like a sewer connection, power line burial and fire suppression upgrades.

In coming weeks the Raptor Center intends to begin the process of reinvigorating its iconic north barn.
“The exciting thing that is coming up here within the next month is we will be lifting up the historic north barn to allow it to then be put back down on a new foundation,” McCarthy said. “The stabilization process of that treasured historic structure will take place this summer.”

After that, McCarthy said, “We have an aggressive plan to continue the remaining onsite improvements over the next couple years.”

Teton County Attorney Erin Weisman said she was “very pleased” with the district court decision.
“But, at this time the county is still in litigation,” Weisman said in an email. “The petitioners have one more right of appeal — to the Wyoming Supreme Court.”

Attorneys for the appellants did not return a request for comment by press time.