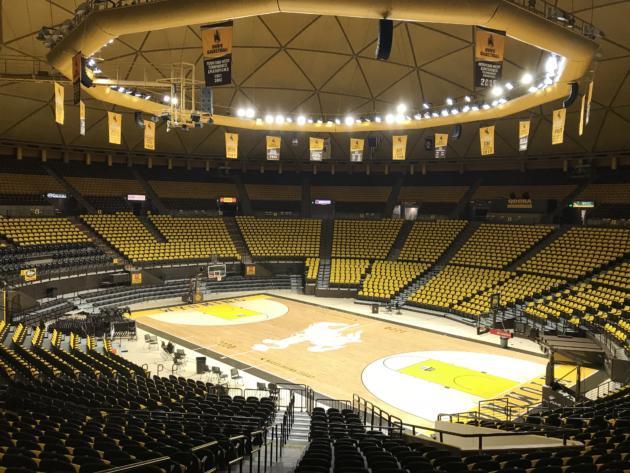 LARAMIE, Wyo. (Dec. 2, 2019) – The Wyoming Cowboys return to the friendly confines of the Arena-Auditorium on Wednesday hosting Air Force in the MW opener at 7 p.m. It is the first game of a four game homestand for the Cowboys. It is the second time in four years that Wyoming has opened conference play with the Falcons.

For more information regarding tickets for Wednesday’s game, visit GoWyo.com/Tickets; email tickets@uwyo.edu; call 307-766-7220; or stop by the UW Athletics Ticket Office on the west side of the Arena-Auditorium located on Willett Drive.

Fans can watch, listen to the contest and follow stats on GoWyo.com. The contest will be broadcast live on radio over the 26 affiliate stations of the Cowboy Sports Network, as Dave Walsh will have the call with Kevin McKinney on color. SVI Media is proud to be part of the Cowboy Sports Network and will be broadcasting the game on The Spur (105.3 FM / 940 AM Kemmerer / Diamondville & 1210 AM Afton / Star Valley). The game will also be available  at SVInews.com/radio and on the SVI Media App.

A Look at the Matchup

Wyoming heads into the contest with a 3-5 overall record after dropping a pair of games at the MGM Main Event in Las Vegas last week. The Cowboy defense has been strong all season long ranking No. 32 in the nation and second in the MW allowing 59.9 points per game. The Pokes have held opponents to 38.5 percent from the field for the season, which ranks third in the MW and No. 64 in the nation. Wyoming has also held the opposition to 29 percent from behind the arc, which ranks fourth in the conference.

The Pokes are led in scoring by redshirt sophomore Hunter Maldonado at 15.8 points per game to rank ninth in the conference. He has scored in double-figures in every game this season. He is No. 28 in the nation in free throws made this season with 37. He also leads the team grabbing 5.6 rebounds per game. Senior guard Jake Hendricks adds 7.9 points per game for the season with 16 made three pointers to rank ninth in the conference. He adds 5.4 rebounds per game to rank third on the Cowboys.

Wyoming and Air Force will meet for the 118th time on Wednesday. The Pokes own a 78-39 record against the Falcons all-time and are 41-15 in the Arena-Auditorium. AFA has taken three of the last four meetings against the Brown and Gold.

Wyoming hosts New Mexico on Saturday at 2 p.m. Wyoming will honor former Cowboy Fennis Dembo prior to the contest and the first 3,000 fans will receive a Fennis Dembo Bobble Head.