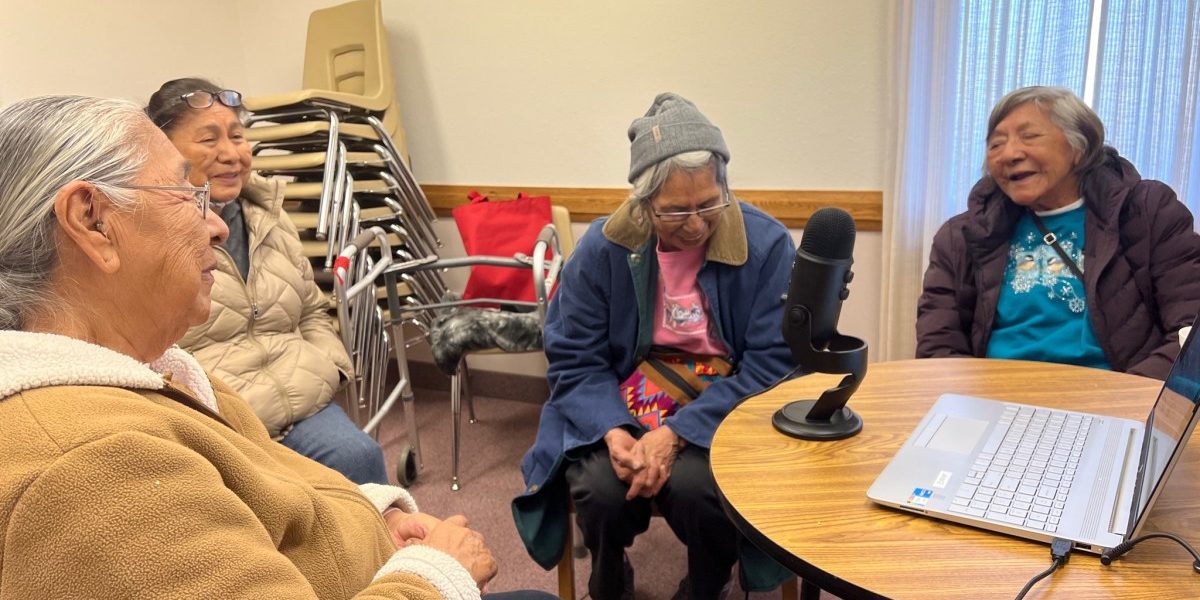 For the last two weeks Robyn Rofkar has been waking up in the cold darkness of 3 a.m., rising early to begin simmering beans or baking blueberry muffins, making sure the 20 Shoshone speakers gathered in the Latter Day Saints church in Fort Washakie are taken care of.

Elders arrive at 9 a.m. each day and gather into small groups to remember and record words through a process called “rapid word collection.”

A linguist from the Language Conservancy, which the Eastern Shoshone Cultural Center has partnered with to complete the project, names a category, something like “sky.” Shoshone speakers then list words that relate: from stars to the sun and the colors that make up the firmament.

The group has recorded more than 4,000 words, which will eventually be turned into an online dictionary. It’s one more step toward ensuring the Eastern Shoshone people have a way of remembering and learning their own language, a project Rofkar, who is a member of the tribe, and the Eastern Shoshone Cultural Center has been engaged in for years.

The oldest person to attend the daily gatherings of Shoshone speakers was 98 years old. Another woman celebrated her 90th birthday during the project. All the fluent speakers of Shoshone tend to be at least 60 years old, Rofkar said, and there are probably fewer than 200 of them in all.

“Years ago it was forbidden for these same elders to speak their own language,” Rofkar said.

That’s because generations of Native American youth were punished for speaking their language, said Wil Meya, president of the Language Conservancy.

“ The basic issue is that languages, especially in the United States, are all in tremendous danger,” Meya said. “To a high degree, that language endangerment was the result of government policies that forbade the use of language and things like the boarding school system that were in existence for over a hundred years.”

By 1954 most tribal members stopped passing their language on to the next generation, he said, and those born after that year primarily spoke English.

Rofkar’s family didn’t speak Shoshone when she was growing up, but she learned some words through Central Wyoming College courses. During her 28 years working at Fort Washakie School, she helped out with Shoshone-language-related programs. Post-retirement, Rofkar took a job as the administrative assistant at the Eastern Shoshone Cultural Center, where she began applying for grants to revitalize the Shoshone language in her community.

New funding became available through the American Rescue Plan Act, and the Cultural Center was able to secure a grant that supported the rapid-word-collection process. While the Cultural Center already has a dictionary with roughly 8,000 words, it doesn’t include pronunciations and spelling isn’t standardized, according to Rofkar. Because of certain vocalization characteristics the Shoshone “p” is more of a “b” sound, for example. Writing Shoshone words without detailed pronunciation instructions poses a challenge, she explained.

Language has the power to shape our worlds. Shoshone, Rofkar noted, is “so descriptive. A lot of the elders are always making jokes, teasing kind of, and there are these funny little ways of putting the words together. It’s very enjoyable to hear.”

The creation of a dictionary accompanied by recorded pronunciations can be a foundation for Eastern Shoshone people. “The dictionary really becomes a great cornerstone for many of the other materials that might be needed,” Meya with the Language Conservancy said. “We kind of act as a bridge between generations, being able to work with the elders, and help bring the language out in a way that is then accessible to the young learners.”

Rofkar is interested in potentially creating a textbook or online materials to help Eastern Shoshone learn their language. “We need more Shoshone language teachers that are fluent, we need to really pass this on before it’s lost,” she said.

The center is applying for another grant to put intensive learning programs in place, she said. The idea behind that initiative is that one or two fluent elders would gather with a group of learners, and within 18 months the learners would become fluent and be able to teach the language to others.

Rofkar, in the meantime, is also still learning Shoshone herself. “I’m working on it. I don’t know if I’ll ever be fluent.”