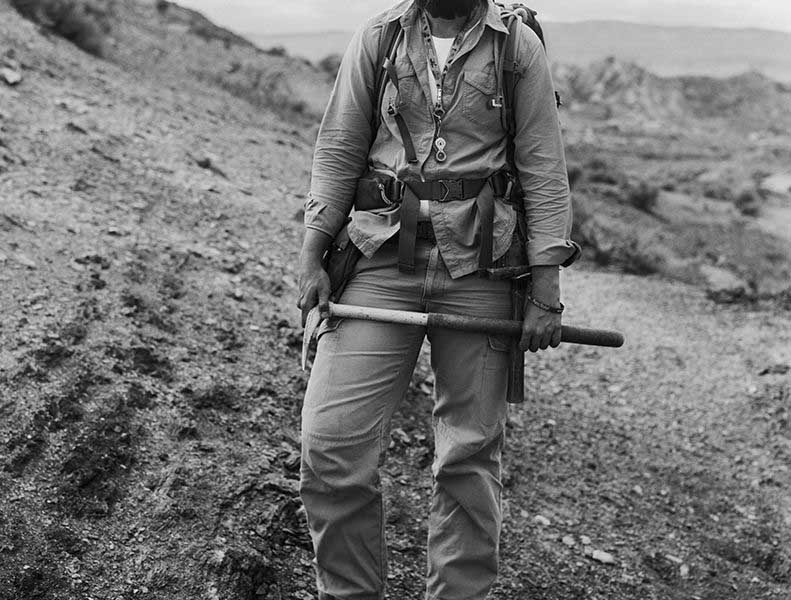 LARAMIE (WNE) — A photography exhibit and film that premiered at the University of Wyoming more than two years ago are now on display at the Smithsonian.

UW associate professor and paleontologist Ellen Currano co-founded “The Bearded Lady Project: Challenging the Face of Science” as a way to highlight the achievements of female paleontologists and draw attention to the challenges they face because of their gender.

The project was first displayed at the UW Geological Museum in March of 2017. Since then, it’s been traveling the country and making stops at museums and universities. Now the project will find its biggest audience yet.

“I never dreamed that it would be at the Smithsonian, our nation’s natural history museum,” Currano said. “That gets an order of magnitude more visitors than anywhere else that will probably display the exhibition. It’s really an incredible opportunity to have our work out there, to have it seen by the general public.”

Currano, who works in both the Department of Botany and Department of Geology and Geophysics, came up with the idea for the project several years ago as a joke — some days as a woman in a male-dominated field would just be easier if she had a beard.

She has a background in geology and studies fossilized plants as a way to learn about past climate, ecology and vegetation.

After sharing the joke with friend and filmmaker Lexi Jamieson Marsh, the joke became a serious idea. They teamed with photographer Kelsey Vance to create a documentary film and photography project exploring the achievements and struggles of female paleontologists.

The crew traveled around the world to film and photograph scientists, while also highlighting Wyoming paleontology at places like Hanna Basin.

At first, they were hoping to find a handful of women willing to wear a beard and talk about their work. As the project progressed, however, they soon experienced scientists seeking them out and asking to participate.

Since leaving Laramie, the project has been displayed at five other locations, most recently at the University of California, Berkeley. The documentary has been expanded into a 52-minute feature. The project has raised money for a scholarship fund, which has so far awarded four research grants to graduate students studying paleontology, to be used for field research.

The project team is currently putting the finishing touches on a book to accompany the Smithsonian exhibit, which includes candid color photographs in addition to the historic, black-and-white recreations.

“The Smithsonian has added shots of non-bearded scientists doing their work, really just to drive home the message that the stereotype exists and this is not what the stereotype should be,” Currano said. “Anyone who wants to should be able to be a paleontologist.”

The exhibit opened Nov. 14 and will be up for six months.

“The Bearded Lady Project” caught the eye of the Smithsonian because of participation by Kay Behrensmeyer, curator of vertebrate paleontology at the museum.

“We were over the moon that she agreed to participate because she is one of the top names in paleontology, and she has been a hero for so many of us coming up through the ranks,” Currano said.

Currano said most exhibit viewers catch the intent of the display right away, perhaps after doing a double-take when they realize the photographs are of women.

“We’re used to seeing black-and-white images of male paleontologists off collecting their dinosaur bones,” she said.

At the same time, she said, the project has provided opportunities to discuss non-binary gender expression.

“That’s been very enriching for me,” she said.

The Smithsonian’s National Museum of Natural History, one of the most visited natural history museums in the world, is dedicated to maintaining and preserving natural history specimens and human artifacts.

A screening of the documentary is scheduled for Dec. 16 at the museum, followed by a panel discussion.