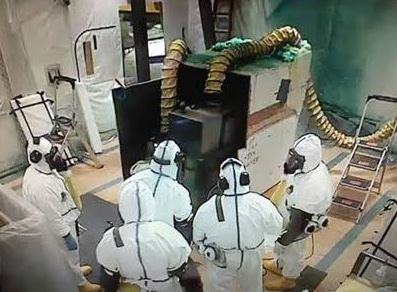 At AMWTP, crews placed the components in 55-gallon drums that were crushed by the facility’s supercompactor, a giant hydraulic ram capable of exerting 4 million pounds of force. The resulting “pucks” were placed in drums and shipped to EM’s Waste Isolation Pilot Plant in New Mexico for permanent disposal.

The crews processed all 72 waste boxes without incident or injury after developing unique ways to overcome challenges associated with each box.

Initially, the large, complex waste boxes would not fit within the AMWTP facility. They also were primarily contaminated with plutonium-238, a radiological material requiring significant operational and radiological controls.

In response, Fluor Idaho designed, fabricated, and installed radiological containment tents with significant ventilation to allow the waste boxes and their components to be manually size-reduced and packaged for removal from the facility.

“This project had unique industrial hazards with size-reducing wooden boxes that approached 12 feet tall and 15 feet in length. The size of the waste boxes, the unique waste components inside, and the radiological contamination in these boxes was some of the most difficult materials to control,” Fluor Idaho Manager Jason Chapple said. “The combined teamwork was simply outstanding.”

The waste boxes were shipped to the INL Site from laboratories at the former Mound Site in Ohio during the Cold War. The boxes contained plutonium-contaminated gloveboxes, large metal objects, such as I-beams and ducting, and other industrial debris. Gloveboxes, which are large stainless-steel structures with several ports containing gloves that allow waste handlers to safely work with radioactive material, were used at Mound to produce components for nuclear weapons and thermoelectric heat sources. Mound supported the nation’s nuclear weapons and energy programs until decommissioning began in 1993.

EM completed cleanup at Mound in 2010. Workers disposed of nearly 20,000 cubic meters of soil and decontamination debris in the cleanup, which focused on a former mixed-waste landfill.