LARAMIE, Wyo. (Nov. 5, 2019) – Redshirt sophomore guard Hunter Maldonado poured in a career-high 32 points and the Wyoming defense held Idaho State 32 percent from the field in a 54-40 win in the season opener on Tuesday evening in the Arena-Auditorium in Laramie. The 40 points was the fewest allowed by the Cowboys against a NCAA Division I team in a season opener since Dec. 1. 1949 in a 42-39 win over Montana State.

“I commend our guys in the sense of buying into the defensive end of the floor,”UW Head Coach Allen Edwards said. “It’s been 70 years since a Wyoming team had held a Division I opponent to 40 points in a season opener.  We had a few lapses on defensive responsibilities at times, but for the most part I really liked our effort on defense tonight.”

Maldonado scored 28 of Wyoming’s 33 second half points. He was 12-of-19 from the field, as it was a career high in both categories. He went 8-of-10 from the free throw line in 33 minutes of action. It was his first contest in a Wyoming uniform since Dec. 11 of last season.

“I thought Maldo (Hunter Maldonado) played a great game, but I thought Jake Hendricks sacrificed tonight.  They (Idaho State) were really trying to take Jake away from the perimeter and that opened up some things for Maldo.  Also Hunter Thompson’s presence on the court also helped open up the court for Maldo.   Maldo played well off ball screens, he played in the post and he got to the free-throw line, so he did a lot of good things tonight.  He also held their leading scorer to five points, and that is why I tell people that he is one of the best two-way players in our league.”

The 32 percent from the field by the Bengals was the lowest by a Wyoming opponent since Cincinnati shot 31 percent in the Cayman Islands on Nov. 22, 2017. The Bengals were held to 17 percent from behind the arc going 4-of-24. Idaho State held the advantage on the glass 32-28.

Thompson got the Pokes off to a 4-0 start with a pair of buckets, the Bengals held the Pokes scoreless for over four minutes taking a 5-4 advantage. But a bucket from Trevon “TJ” Taylor and a triple by Jake Hendricks gave Wyoming a 9-7 advantage with 14 minutes left in the frame.

Maldonado got into the scoring with back-to-back buckets to give Wyoming a 13-8 advantage halfway through the half. His second bucket was sparked by a steal from Brandon Porter at the top of the defensive key.

The Pokes would get defensive from there holding the Bengals scoreless for over six minutes and built a 16-10 advantage. To the point in the game, the Bengals shot only 21 percent from the field and were 1-of-11 from behind the arc.

Idaho State would head up from their finishing the half going 5-of-6 from the field, as Wyoming would take a 21-18 lead into the half. Wyoming shot 47 percent from the field in the frame and held the Bengals to 32 percent.

Both teams got off to a slow start to open the second frame, but Maldonado scored nine points to help the Pokes build a 33-21 lead with under 13 minutes remaining. The Pokes would end up going on an 11-0 run finishing with an A.J. Banks fast break layup for a 35-21 lead with 11:16 left. Wyoming held Idaho State scoreless for over six minutes.

Idaho State responded with an 8-0 to make it a 35-29 contest with under 10 minutes remaining, but the run was halted by an and-one play from Maldonado.

The Bengals would then hit five straight field goals to make it a 41-35 game with just over six minutes remaining. But Maldonado and the Pokes outscored the Bengals 13-5 to close the contest and earn the 54-40 win.

The Bengals were led by Malik Porter with nine points. He also led the team with eight rebounds for r the night. Tarik Cool and Jared Stutzman each added eight points for Idaho State.

The Cowboys return to action on Sunday at 10 a.m. MT against South Carolina. The contest will be televised on SEC Network. 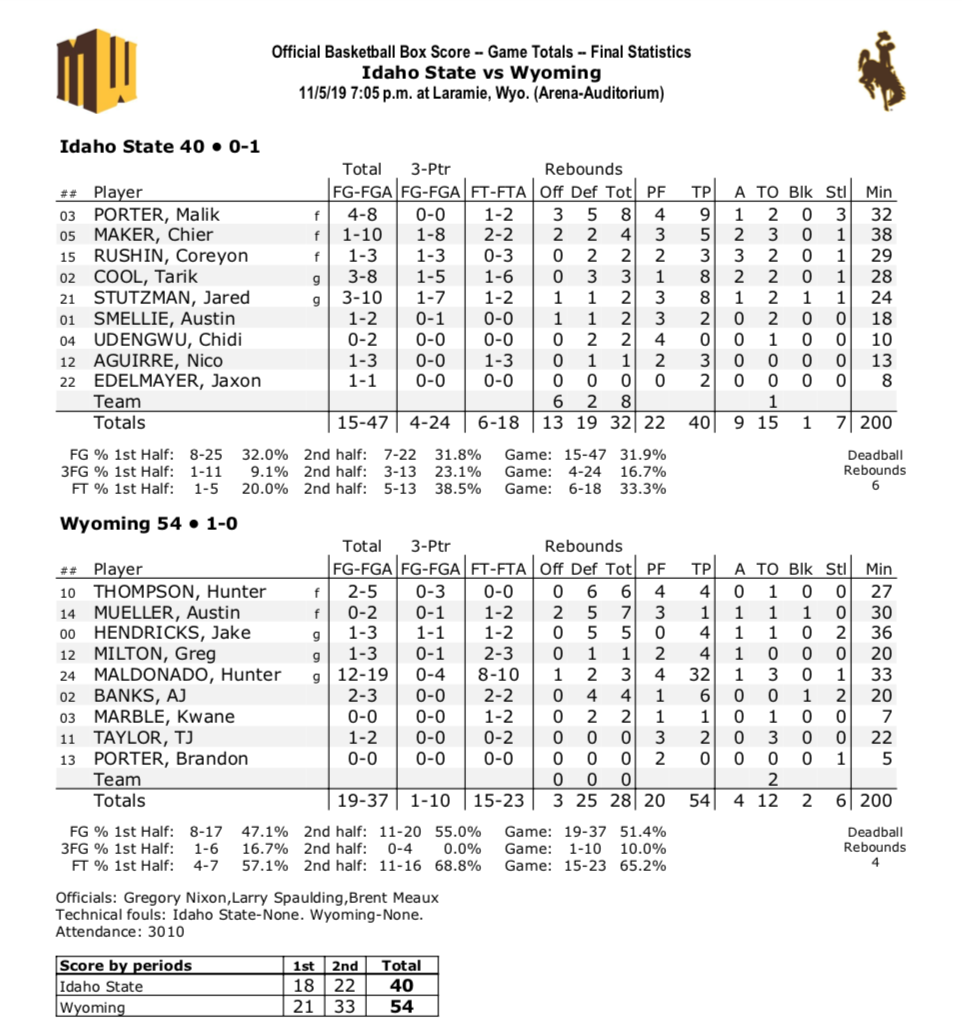