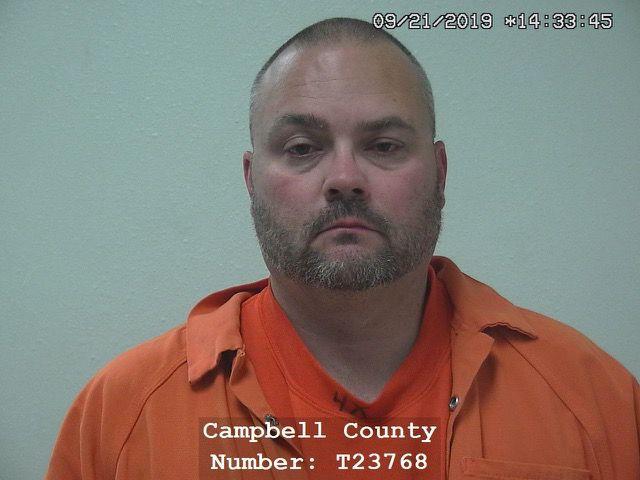 GILLETTE — The man acting as treasurer of two local youth wrestling clubs is accused of stealing a total of $64,827 since 2017.

Johnson became treasurer of the Gillette Wrestling Club in October 2017 and of the Camel Kids Wrestling Club in June 2018. He was part of the latter club’s organization for almost 13 years and been on the board for most of that time, according to an affidavit of probable cause filed in the case.

In late August, the Camel Kids Wrestling Club had gathered evidence about Johnson’s alleged use of the club’s debit card for personal use, many of the charges made on Amazon and at Walmart, but not for club purposes. The board confronted Johnson about the charges and he allegedly admitted to spending the club’s money for his personal use, according to the affidavit.

He agreed to pay pay back the $11,000 that the club thought at that time that was missing. But board members decided to report the embezzlement to police instead after learning that he also was allegedly embezzling from the Gillette Wrestling Club, according to the affidavit.

The Gillette Wrestling Club discovered Aug. 31 that its account at Wells Fargo Bank was closed because it was overdrawn. Board members also learned he’d drained a different account at Campco Federal Credit Union and had opened a new account at Pinnacle Bank with a $4,000 donation to the account and it is in arrears, according to the affidavit.

Lico Sifuentes, president of the Gillette Wrestling Club, said they were shocked to find the account empty at Wells Fargo.

“(Board member) Denise (Igo) was in tears and I was almost in tears,” he said. “I don’t know how somebody could do this.”

Johnson would come to board meetings with information about the accounts, but “we never made him prove anything” — something in hindsight he said every board should do. The bills were paid, so they had no reason to believe that the money wasn’t where he said it would be, Sifuentes added.

The Gillette Wrestling Club said that it has made changes to its organization to ensure that it doesn’t happen again, it said in a letter.

The money that Johnson is accused of taking came from donations and fundraisers, not the Campbell County Public Recreation District Rec Mill grant, which is still intact, the club said in a letter.

“We are saddened by this deceit,” the club said. “However, we are going to move forward to get to the bottom of the financial issues, in addition to making the needed preparations for a successful Pat Weede Memorial Tournament in December 2019.

“Gillette Wrestling and Camel Kids have been helping wrestlers in this community for many years. And, with the help of the multitude of wonderful people surrounding us, the good work of these organizations will continue for the youth of our community,” the board said.

Mike Johnson, Camel Kids chairman, said in a letter that to discover the money missing “was particularly shocking” because it was allegedly taken “by a person within both the organizations who was in a position of great trust. It is this that hurts the most.”

“Despite this huge setback, we will not allow any criminal act to defeat our spirit or the continuation of either Camel Kids or the great work of Gillette Wrestling,” wrote Johnson, who is not related to Steven.

The Camel Kids Club believes that the thefts began about a week after Johnson was elected treasurer. A board member was alerted to problems in May when a Casper hotel called to report that it hadn’t received payment for rooms that were reserved for an upcoming event. Johnson said he would take care of it. But it still hadn’t been paid a few days later when the board member got a second call from the hotel, according to the affidavit.

She began to investigate and found some fraudulent charges that totaled $11,170 on the club’s debit card in August.

But as the club continued to investigate, it found more money missing, according to the affidavit. The money generated from two raffles and registration fees also came up short. The total deposited should have been at a minimum $63,180, but only $47,000 had been deposited — a difference the club attributed to cash payments.

Between the debit card payments and the short deposits, the club figured it lost $26,650.

For the Gillette Wrestling Club, the board found $30,167 worth of fraudulent withdrawals from two bank accounts, which Sifuentes said were spent on a variety of things from contact lenses to city utility bills to Amazon orders to hotel rooms at tournaments.

It also lost the $4,000 deposit at Pinnacle plus was at least $1,937 in the red on it. It also found another $2,073 that hadn’t been deposited from a recent fundraising event.

The two clubs vowed to continue to operate even though it may take more donations to make that happen.

“We teach these kids that sometimes they may be down, but never out, and the same is true for our entire program,” Johnson wrote.