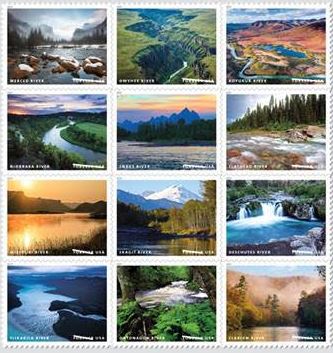 BEND, OR — The U.S. Postal Service today celebrates America’s Wild and Scenic Rivers – those deemed outstandingly remarkable for their fish and wildlife, geology, recreation and cultural or historical significance – with 12 new Forever stamps. Each stamp in the pane showcases a different segment of the National Wild and Scenic River System. “Part of America’s rich heritage is the natural beauty of America’s rivers and the many habitats that support wildlife,” said Joe Corbett, U.S. Postal Service chief financial officer and executive vice president and the stamp ceremony’s dedicating official. “When Americans use the stamps either to mail letters and packages or to add them to collections, they will be reminded of our cherished Wild and Scenic Rivers.” News of the stamp is being shared on social media using the hashtags #WildScenicRiversStamps and #WildRiverStamps.

When President Lyndon B. Johnson signed the Wild and Scenic Rivers Act into law in 1968, he noted unspoiled rivers were very rare and took action against the fear that “all rivers will go this way unless somebody acts now to try to balance our river development.”  Since then, the National Wild and Scenic Rivers System has grown to include more than 200 river segments — about 13,000 miles of approximately 3 million U.S. river miles spread across 41 states and Puerto Rico.  Wild and Scenic Rivers

Forever Stamps The pane of a dozen different designs features a portfolio of photographs that beautifully represent the more than 200 rivers or river segments designated within the Wild and Scenic Rivers System. Art Director Derry Noyes designed the pane using existing photographs.  At bottom left on each stamp is the river name. The words “FOREVER” and “USA” appear at bottom right. All stamp type is in white in the same capitalized sans-serif font. The images are displayed on four rows of three stamps each, as listed below, reading from left to right on the pane. All first-row photographs were captured by award-winning photographer Michael Melford. A wintery shot of the Merced River in California is followed by two aerial photographs: a seasonally verdant Idaho segment of the Owyhee River and Alaska’s meandering Koyukuk River. The second row begins with another aerial photograph: Melford’s image of Nebraska’s tree-lined Niobrara River. Next are two photographs by naturalist Tim Palmer: a Wyoming segment of the Snake River with a spectacular sunset silhouetting the Grand Tetons and a Montana segment of Flathead River whitewater rapids. Row three begins with the White Cliffs segment of the Missouri River in Montana, in an image captured by Bob Wick, a staff photographer for the Bureau of Land Management (BLM). Tim Palmer photographed the Skagit River in Washington State, with volcanic Mount Baker in the background. Waterfalls along Oregon’s Deschutes River were photographed by Wick. The fourth and final row offers an aerial shot of the Tlikakila River in Alaska, captured by Melford. Next, in a Palmer photograph, is a view of Ontonagon River rapids running through lush greenery in Michigan. The final image shows Pennsylvania’s Clarion River, mist-shrouded in a photo by Wick. Framing the stamps is selvage that again features Melford’s Merced River image. At top, the title “Wild and Scenic Rivers” is printed in a coordinating gray, left of center, in a graceful serif font.   The Wild and Scenic Rivers stamps are being issued as Forever stamps. Forever stamps are always equal in value to the current First-Class Mail 1-ounce price.

Background on Wild and Scenic Rivers The special streams of the National Wild and Scenic Rivers System are those deemed “outstandingly remarkable” in terms of “scenic, recreational, geologic, fish and wildlife, historic, cultural” or other values. These rivers or segments are, in the words of the 1968 Wild and Scenic Rivers Act, “allowed to remain in their free-flowing state and natural setting without man-made alterations.” The Wild and Scenic Rivers Act categorizes designated segments as either wild, scenic, or recreational. Wild rivers are undammed, unpolluted, generally accessible only by trail, and surrounded by “essentially primitive” shoreline, although some may be “accessible in places by roads.” Designations often result from grassroots action by local citizens. With outdoor recreation increasingly popular in recent decades, Americans have sought out clean rivers—whether to swim or fish in gentle meanders or to raft or kayak through challenging rapids. Natural areas near rivers are rich with biodiverse habitats and are favored destinations for camping, hunting, hiking, climbing and moments of reflection—resets that help counter the frenzied pace of modern life. Customers may purchase the Wild and Scenic Rivers Forever stamps at The Postal Store at usps.com/shop <http://www.usps.com/shop> , by calling 800-STAMP24 (800-782-6724), by mail through USA Philatelic, or at Post Office locations nationwide. Forever stamps will always be equal in value to the current First-Class Mail 1-ounce price. Information on ordering first-day-of-issue postmarks and covers is at usps.com/shop <http://www.usps.com/shop> under “Collectors.” A video of the ceremony will be available on Facebook.com/USPS <http://www.facebook.com/USPS> .  The Postal Service receives no tax dollars for operating expenses and relies on the sale of postage, products and services to fund its operations.