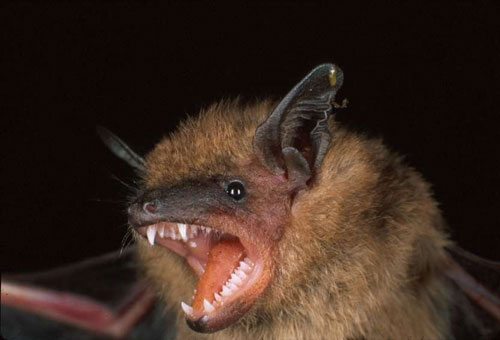 JACKSON — Sitting around a campfire is the stereotypical camping activity: Flames lick the logs, someone roasts marshmallows while bats and nighthawks swoop around, eating mosquitoes.

For Ashley Pipkin that very scene in a Targhee National Forest campsite turned less than pastoral Aug. 10 when a bat either fell onto her from a tree or flew into her neck in the dark.

“I grabbed it with my hand,” she said, “then it bit me on the hand and I threw it on the ground.”

The presumably frightened, shaken critter scuttled into the darkness while Pipkin and her friends discussed what it might have been. She had a small wound on her hand, and she worried the animal had also bitten her neck.

Then they heard it vocalizing near their camp. For a while they could only hear it in the vicinity of their fire, but eventually the bat crept close to their camp and into view.

“One of my friends has the rabies vaccine — we are a group of biologists,” Pipkin said. “She was able to help me put it in a lunch box.”

Given that it was nighttime, and ranger stations and bat-testing labs were closed, the group observed the bat in its temporary confinement. It looked agitated and needed to drink water, which are signs of rabies but also signs of stress. The biologists were split on the diagnosis, but Pipkin was “pretty sure it had rabies.”

Pipkin took a quick trip to the Bechler Ranger Station, then the Centers for Disease Control lab in Bozeman, Montana, where she dropped the bat off to scientists who could confirm or deny the bat’s diagnosis. Because it was the weekend, Pipkin had to wait until Monday for results.

“I expected a call about 1:30 p.m. my time,” said Pipkin, who lives in Nevada. “I got the call, and they said it tested positive.”

When Pipkin talked with the News&Guide on Tuesday, she was tired from the first shot in the rabies treatment, a four- or five-shot regimen that can take up to a month. Her contact with the rabid bat came just a few days after a visitor to Grand Teton National Park had an oddly similar experience.

The morning of Aug. 5, a group was heading out from the Jenny Lake boat ramp for a hike. As they ascended the trail a bat fell from the canopy and landed on a woman’s neck. As she swatted it away it bit her left thumb, then crawled around on the ground.

“We grabbed a piece of bark and swept it into a sandwich baggie,” said Rick Hafenfeld, a retired wildlife biologist who was helping lead the trip.

Park rangers helped deliver the bat to the Wyoming State Veterinary Laboratory, which confirmed the bat was rabid. Teton park officials did not disclose the woman’s name.

Having a pair of confirmed human contacts with rabies-positive animals within about a week of each other and about 30 miles apart as the bat flies is uncommon but not as wild as it might sound, said Wyoming Game and Fish Nongame Mammal Biologist Nicole Bjornlie.

“Rabies is pretty rare, but we do get some cases that pop up,” she said. “It is really odd that they both involved bats falling out of trees.”

Both Bjornlie and Western Ecosystems Technology biologist Larisa Bishop-Boros said that about 0.5% of wild bats have rabies. Bjornlie said that while people may imagine most bats spend their time in caves and that having them fall out of trees is out of the ordinary, some species in the Myotis genus — which both rabid bats were — are tree roosting.

Because the bats have to be killed to perform the brain-tissue test that confirms rabies, Bjornlie said, it is difficult postmortem to determine their species. About 11 or 12 Myotis species live in the region, and their differences are subtle.

From the circumstances it is almost impossible to tell if the bats were tree-roosting species that happened to have rabies or if they were acting strangely, which is a mark of rabid animals. The CDC website says rabies is impossible to diagnose in the field, but rabid bats may be awake during the day or found in places they might not normally be found.

However, Bjornlie said, like in these situations, a person may be able to tell if a bat is acting strangely.

“When they get rabies they are not asymptomatic,” she said.

The proximity of the rabid bats combined with the pair of rabid bats found in Teton County in 2017 could spark suspicions of a trend, but the biologists said it is likely an odd coincidence. Bishop-Boros said August, especially in Wyoming because of its early winter, can be the start of bats’ fall migrations, which increases the chance a rabid bat will come in contact with a human.

She said she wasn’t aware of any studies that have linked environmental factors like white-nose syndrome to increased rates of rabies.

Bjornlie wouldn’t rule out environmental factors as causes of the uptick in rabies prevalence but pointed more toward increased recreation.

“If there’s some climate cycle or precipitation cycle that adds to it, I wouldn’t be surprised,” she said, “but another thing is how often people come into contact with bats.

“More people means they are more likely to come into contact.”

For those worried about encountering a rabid bat, the biologists stressed that the probability of running into one in the backcountry is so low that people shouldn’t change their outdoor activities. Bjornlie said people can, however, make sure that their houses are sealed and that if bats move in they call Game and Fish to help “evict them.”

“I don’t want people to be scared of bats because of this,” she said. “I see bats all the time, and bats are still my friends, even after this.”