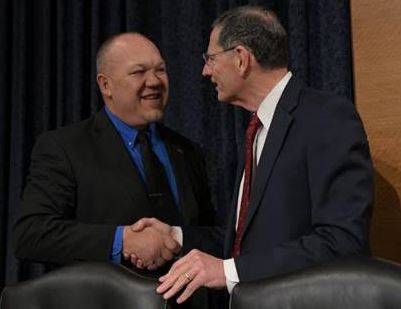 Wyoming’s Todd Fornstrom Testifies Before the Senate on Waters of the U.S. Regulations

Fornstrom was testifying before the committee at a hearing titled “A Review of Waters of the U.S. Regulations: Their Impact on States and the American People.” Barrasso introduced Fornstrom to the committee prior to his testimony. “I will take the privilege of introducing Todd Fornstrom who is here and has served as the president of the Wyoming Farm Bureau Federation since November 2016. “He was elected to serve on the board of directors of the American Farm Bureau Federation in January of this year.

“He owns and operates a farm with his father and two brothers on the Fornstrom Feedlot near Pine Bluffs, Wyoming. His farm consists of irrigated corn, wheat, alfalfa, dry beans, and a cattle and sheep feedlot as well. “He also runs a trucking business, custom harvest business, and runs Premium Hay Products, an alfalfa pellet mill. He’s a very busy man in our state. “Over the years, Todd and his wife Laura have held many leadership roles at the county level, the district level and the state level.

He is also a local school board member. So I assure you that this hearing will be no more challenging than a local school board meeting. “I also want to congratulate your son who has just finished his first year at West Point. I know he’s getting ready to have two weeks off, and I know you’re looking forward to having him home. “Thank you for everything you do for the people of Wyoming and for being here today,” said Barrasso.

In his written testimony, Fornstrom outlined the deep interest Farm Bureau members have in water quality. “Farm Bureau members deeply value protecting water resources because their farms and ranches are water-dependent enterprises. On a personal level, I am deeply protective of water quality because I raised my family drinking from a well on our farm. Simply put, farmers and ranchers need water, which is why their operations typically are located on lands where there is abundant rainfall or at least adequate water available for irrigation,” said Fornstrom. Fornstrom also detailed the Farm Bureau’s belief that the Trump administration’s 2019 proposed WOTUS rule would protect waters. Fornstrom stated, “The CWA requires the federal government to work hand-in-hand with states, because the federal government cannot and should not regulate every single wet feature in every community.  By drawing clear lines between waters of the U.S. and waters of the state, the proposal strengthens the cooperative federalism Congress envisioned and that the Supreme Court has long recognized as fundamental to the Clean Water Act.” Fornstrom concluded by stating, “Farm Bureau supports the proposed rule, because it strikes a balance between regulatory clarity and transparency on the one hand, and the need for robust environmental protection of waters and wetlands on the other.  It better aligns with the CWA and Supreme Court precedent than did the 2015 rule, and it reflects an effort to preserve states’ roles in regulating the waters and natural resources within their boundaries.  It is grounded in science but also reflects a legal and policy decision on the appropriate scope of the agencies’ regulation under the CWA.” For more information on Fornstrom’s testimony and the hearing, click here .