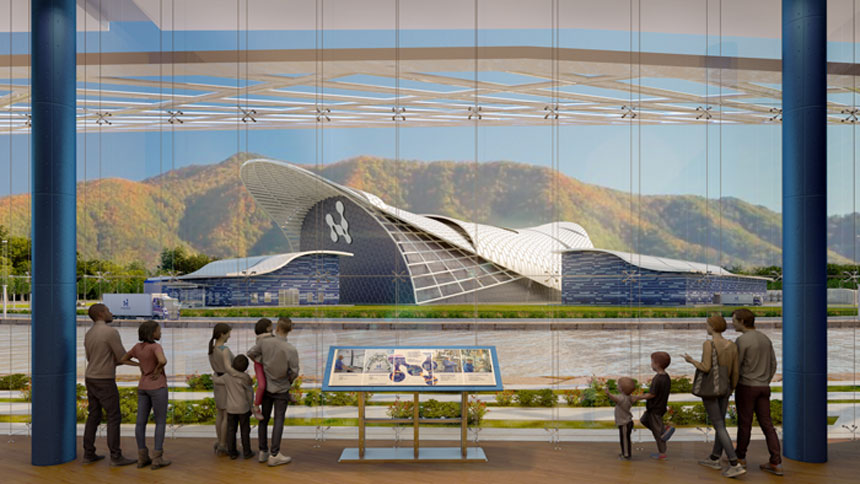 A look at the NuScale small modular nuclear reactor project

This story provided by EastIdahoNews.com. It is used here with permission.

IDAHO FALLS — New nuclear reactor technology is being developed here in Idaho, and Idaho Falls Power wants a piece of it.

NuScale Power is developing a new kind of nuclear reactor they believe will be safer, smaller and cheaper than current reactors. Idaho Falls Power is hoping to take advantage of the new reactors once the first one goes online.

“What we’re trying to do at NuScale is basically bring energy to the world,” Downs said.

The United States gets around 20 percent of its electricity from nuclear power plants. In general, these commercial nuclear reactors use water to generate electricity, either by boiling water or converting pressurized water into steam. The former accounts for a much smaller percentage of nuclear reactors in the U.S. The latter, known as a pressurized water reactor, is much more common.

Pressurized water reactors account for 63 percent of nuclear reactors in the U.S., according to energy.gov.

Standard pressurized water reactors use a series of pumps to pump water under an immense amount of pressure, to keep it from boiling, into the reactor’s nuclear core. Nuclear fission heats the water, which is then pumped into a steam generator. The steam turns a turbine connected to an electric generator, and electricity is created.

These reactors are capable of producing roughly 1,000 megawatts of energy. For perspective, 1 megawatt can power between 400 to 900 homes in one year.

In his presentation Friday, Downs said these standard pressurized water reactors can generate enormous amounts of energy. However, they do have some drawbacks.

One of the main drawbacks, Downs said, is large-bore pipes and water pumps. The pipes and pumps are necessary for generating electricity. They keep the reactor cool. If they break and the reactor loses water, it could meltdown.

The Nuclear Regulatory Commission requires plants to be prepared for the absolute worst-case scenarios such as having backup systems to keep water pumping into the core. However, Downs explained that those systems failed in 2011, in Fukushima, Japan.

On March 11, 2011, a magnitude 9 earthquake occurred off the coast of Japan. The earthquake triggered the sensors in the Fukushima Daiichi Nuclear Power Plant, which caused it to begin shutting down.

As it shut down, the water pumps also shut off, triggering backup generators to begin pumping water into the reactor to cool it down.

Then a 45-foot high tsunami hit, wiping out the generators and destroying any chance of cooling down the reactor. This lead to meltdowns, radiological release into the atmosphere and a 12-mile diameter evacuation zone.

Downs said a NuScale Modular Reactor is a completely different take on a pressurized water reactor. Instead of pumps and large-bore pipes to keep water flowing to the reactor core, the NuScale Modular Reactor uses physics and gravity. It doesn’t need external power and it doesn’t need external water. NuScale design completely prevents a Fukushima-like disaster.

A NuScale power plant will contain 12 power modules. Each module is 75 feet tall and 15 feet wide and capable of producing 60 megawatts for a total output of 720 megawatts with all 12 modules combined.

Each module is, essentially, its own pressurized water reactor in one unit. The nuclear core sits at the bottom submerged in water. As the water heats up it rises into the steam generators, the steam is sent out to a turbine then condenses and is returned back to the reactor core.

“We’re using natural physics instead of big pumps and valves,” Downs said. “A NuScale reactor is designed for total passive cooling. Passive cooling does not require any pumps. It uses physics, gravity, heat transfer — no power is needed.

In the case of a loss of power to the plant, the modules will cool the reactor cores down themselves to the point where they will be able to be air-cooled in 30 days. After that, the module can safely sit indefinitely.

Because of the relatively small size of the modules, their reactor cores are 1/20th the size of a large reactor’s, they can be built offsite then transported to the plant and installed, rather than having to be built onsite as in a traditional nuclear power plant.

Downs said this will help keep costs down, which is what Idaho Falls Power is looking for.

The growing need for electricity

The population of Idaho Falls continues to grow and with it comes more demand for power. Idaho Falls Power General Manager Bear Prairie said summer peak power consumption is growing by 1.8 percent per year, and the total annual energy consumption is also starting to grow. What’s not growing is power generation.

Idaho Falls Power gets electricity from three main sources, all of which are carbon-free.

The third source is a wind energy contract. Idaho Falls Power owns a portion of the Horse Butte wind farm, which provides a small percentage of additional electricity.

“When we’re short electricity, we have to rely on the market to purchase that to meet our needs,” Prairie said. “In times that we have a little bit of surplus, we will sell that into that market and bring revenue back to buy electricity for the times that we don’t.”

He said they don’t want to have to rely on the market as prices per megawatt can fluctuate between practically free to more than $1,000.

Idaho Falls Power’s goals are to maintain a carbon-free portfolio of energy sources, limit how much power is needed to be purchased from the market and have flexible energy resources. Prairie said that’s where NuScale comes in.

Idaho Falls Power negotiated a contract with NuScale to purchase 10 megawatts of power at $55 per megawatt once the first Small Modular Reactor comes online.

“We said, ‘You have to deliver this project on budget, on time for $55 a megawatt, and (NuScale) DOE and all those entities are going to take the risk (in developing the reactor),’” Prairie said.

Development of Nuscale’s reactor is expensive and comes with investment risks. All of that risk is on the Department of Energy, the Utah Associated Municipal Power Systems, NuScale and their primary investor Fluor.

UAMPS is a subdivision of the State of Utah that provides energy services to community-owned power systems throughout Utah, California, Idaho, Nevada, New Mexico and Wyoming.

Out of UAMPS’ 45 member utilities, 36 — including Idaho Falls Power — have signed onto the NuScale small modular reactor project.

He said if NuScale fails to meet the price target, all of the money Idaho Falls Power and other entities put into the project will be refunded.

NuScale Power was formed in 2007 with the goal of creating a Small Modular Reactor. In 2011, the global engineering and construction company Fluor became the primary investor in NuScale. More than 400 NuScale patents have been granted or are pending in 20 countries, and the company has more than 350 employees throughout its six offices in the U.S. and a seventh office in the United Kingdom.

Downs said the first three phases of the four-stage review process from the Nuclear Regulatory Commission have been completed ahead of schedule. The first plant is on schedule to open in 2026.

“NuScale is committed to meeting our budgets and our times,” Downs said.

They plan to submit the Combined Operating License Application by 2021, and in 2022 fabrication of the first power module and construction on the plant will begin.

In 2023 NuScale will receive its final licensing, and the first Small Modular Reactor will go online in 2026.

Once online, Idaho Falls Power will receive its 10 megawatts from the plant. That could jump up to 14.8 megawatts in 2034.

The Department of Energy will pay for and construct the first NuScale power module. Prairie said because it’s the first of its kind, it will be the most expensive. The DOE will keep the module for 15 years for testing. After those 15 years are up, Idaho Falls Power will have the option of purchasing that module.

“The key that we have as an engineering firm … is to meet all our commitments on time and on budget, and so far we’ve done all that,” Downs said.