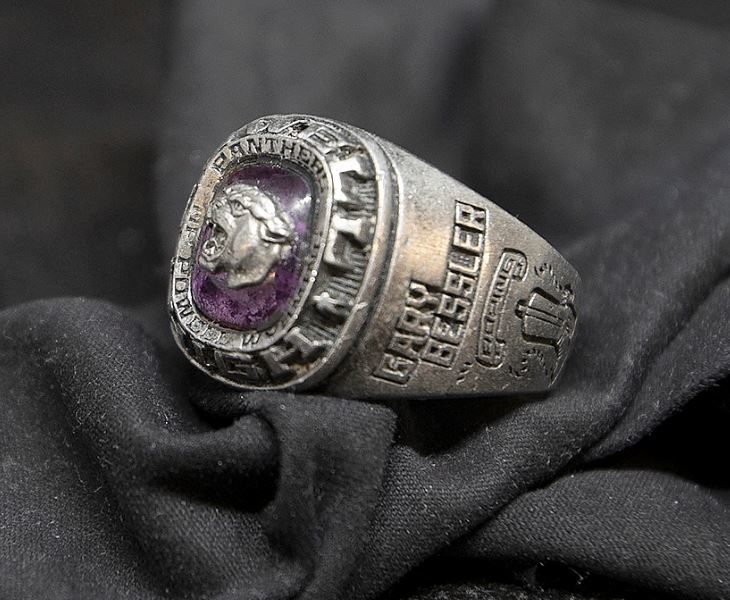 POWELL — Most of the debris that comes out of Powell’s sewers during maintenance is the odd trash you’d expect, such as marbles and disposable razors. But the long-lost treasure that City Wastewater Department Technician Levi Kary found last week was entirely unexpected.

Crews have been performing some maintenance work on the city’s storm drains and sewer lines. They’ve been “jetting” the pipes to keep them clear of debris, then using a vacuum truck to suck out whatever is pulled loose.

The crew jetted the sewer lines near Avenue G by the hospital, a drain line that runs under homes between Mountain View and Division streets and a sewer near the intersection of Fifth and Bernard streets.

After the work was done, city workers went to dump the vac-truck, which had collected about two shovelfuls of debris. Kary looked down at the pile, and sitting right on top was an old ring. Curious about what had come out of the sewer, Kary picked it up and examined it. Right there on the side of the ring was the name “Gary Bessler.” Kary decided to see if he could track down the owner and return the ring. It didn’t take much more than an internet search to find a Gary Bessler on social media who was living in Buffalo, but hailed from Powell.

Kary sent the man a message.

Way back in the summer of 1991, Gary Bessler had just graduated from Powell High School. His class ring commemorated his achievement, and he had it engraved with his name and tributes to his interests in rodeo and agricultural.

Like many graduating seniors, Bessler was celebrating that summer. He went to a party one night with a female friend, who asked if she could wear the ring. The two weren’t dating, but Bessler let her wear it. At the end of the night, he asked for the ring back and learned she had lost it.

Bessler said his feelings at the time were unprintable, but he was “pretty upset,” to say the least.

Nearly 27 years passed since that summer and Bessler — who now lives in Buffalo — had long forgotten about his class ring when he received Kary’s message.

“I was pretty surprised to see it again,” Bessler said.

Just as surprising as finding the ring among the unpleasant debris from the sewers was that the item was in such good condition. Kary said they find pennies worn down so much it’s hard to tell the item was once a penny, but the engraving on Bessler’s ring was still quite legible.

“For the ring to be in that good of shape after all this time is pretty amazing,” Kary said.

Kary is mailing the ring back to its owner — and Bessler told Kary he’d buy him a drink the next time he’s in town.

This is not the first reunion of a long-lost Powell High graduate’s class ring with its owner in recent years. Back in 1968, Micheal Peyton let his girlfriend wear his class ring. When they broke up and she returned it, Peyton threw the ring into a field in a teenaged, short-sighted fit.

Years later, Bob Thomas was out in the same field with a metal detector and found the ring, which had only Peyton’s initials. Unable to find the owner based on two letters, Thomas put it in a box and left it there. Later, in 2016, his wife, Patricia, rediscovered the ring. She decided to do some sleuthing and eventually tracked down Peyton.

It seems lost class rings in Powell have a way of finding their way back to their owners.

Bessler said he’s not sure what he’s going to do with the ring when he gets it back.

“I might wear it for a while if it still fits,” he said.