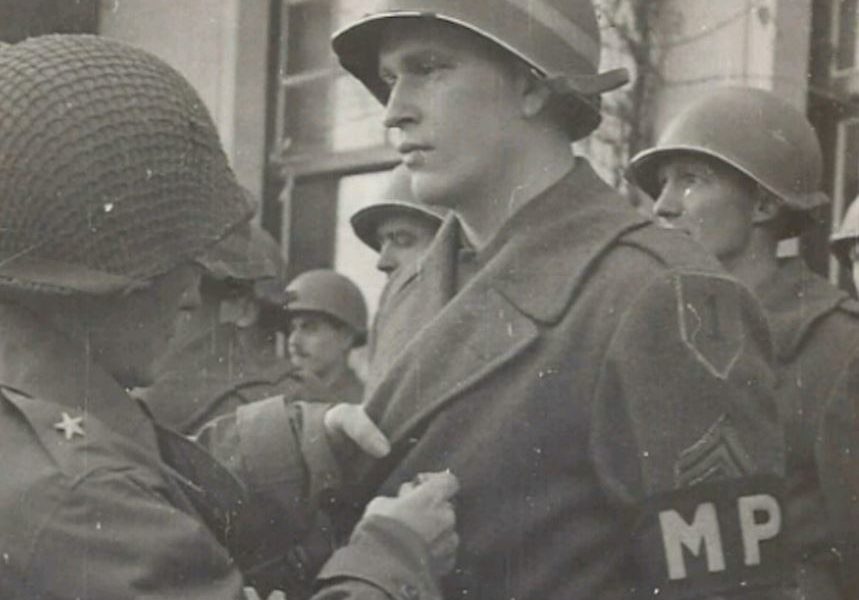 Returning a Flag to Honor Their Father

CHEYENNE — The French flag could have just remained at an American Legion post in Pennsylvania, or as a family heirloom, something to be kept in a drawer and taken out occasionally when stories of their father were being told.

Instead, that flag, a visible reminder of their father’s part in the victory for the Allies on that bloody day 75 years ago, is now back home in the village where it belongs.

A large contingent of the Garrard family is currently in the village of Colleville-sur-Mer, France, to return a French flag their patriarch, Wes Garrard, took down there on June 7, 1944, one day after the start of the D-Day invasion.

The village is set to honor the family and officially receive the flag from them today in a ceremony tied to the 75th anniversary of the invasion.

The flag’s journey from that little village to the United States is one that traces the route many GIs took after they left Europe at the end of the war. Garrard had brought that flag with him back to the United States and stored it away, eventually leaving it in his American Legion post north of Pittsburgh, where it stayed until his death a few years ago.

After their father’s death, his children were going through some of his things at the post and discovered an old, folded-up French flag and immediately knew what they were holding.

“We knew this was the flag dad had talked about,” said the Rev. Bob Garrard, Wes Garrard’s son and the former lead pastor at First Presbyterian Church in Cheyenne.

Wes Garrard had removed the French flag and put up the United States flag in the village after Nazi forces had fled.

“Dad said when he finally got up there, there was a flag pole there. The village had taken down the Nazi flag and they put up this flag, which has on one side the French flag and on the other side has the Veterans of Colleville-sur-Mer,” Bob Garrard said. “He took it down to say the Allies had taken the beach. But he never said what he had done with the flag.”

The village was essentially deserted because of the intense fighting on the beaches of Omaha, and Wes Garrard didn’t have anyone to hand the flag off to. So instead, he wrapped it up and put it in his bag, where it would remain until he made it back to the States after the war ended.

After the family discovered the flag, they tried to decide what to do with it. They could have kept it in a drawer, but it just didn’t seem right because of the importance to their family and as a historical object of one of the most important days in American history.

So they tried to give it to museums as an artifact of the 1st Division’s taking of Omaha Beach. But they didn’t get any responses. Holly Garrard, Bob’s wife, said it was like fate was telling them it needed to be returned back to Colleville-sur-Mer.

“It just seemed like the right thing to do,” Holly Garrard said. “We thought we should give it back for the 75th anniversary of the invasion.

“This is a way of really honoring his father and the sacrifices he made and everybody else who landed there. They are the Greatest Generation.”

Given that about 2,000 U.S. soldiers died on Omaha Beach during the invasion, the fact Wes Garrard was even in Colleville-sur-Mer was remarkable. Bob Garrard said when his father would tell the story of that day, he said the only reason he survived getting out of the landing craft is because he had reached down to get a set of road signs.

As a military police officer, the signs were meant to be used to help direct all the traffic after the Allies had taken the beach. Thousands of soldiers and hundreds of vehicles can cause a traffic jam in the best of circumstances, and Wes Garrard would need those signs to help ensure troops, tanks and supplies weren’t bottlenecked and an easy target for counterattack.

It turns out those signs are what helped save his life in that moment on the boat.

As his father’s landing craft opened up the gate, a German machine gunner fired upon the soldiers. One soldier was immediately killed, and four more were wounded.

“My father had just happened to bend down to get his traffic signs when the machine gun fired on them and the bullets went over him,” Bob Garrard said. “Once he got off the boat, the water was too deep, and he had to swim to shore. It’s amazing he wasn’t killed trying to swim to shore the way the Germans were shooting up everybody.”

It wasn’t the only time that day, or in subsequent days, that Wes Garrard would have his life spared by happenstance or luck. Bob Garrard said there were multiple instances where his father was supposed to be in one location, but chance directed him to another, and that’s what saved his life.

“There’s a lip of sand on that beach that my father said saved his life,” Bob Garrard said.

Wes Garrard earned a Bronze Star for his service during D-Day. But his story isn’t unique when it comes to the D-Day invasion.

Thousands of troops died on the first day of the invasion, and many more died in the coming months. But their sacrifice marked the beginning of the end of the Nazi occupation of western Europe.

There never seems to be a good reason why one soldier dies and the other survives. For those during the D-Day invasion, their survival sometimes relied on something as simple as having to stay behind to un-jam a gun that had been clogged by sand and water from the landing.

The Rev. Bob Thomson’s father was also in the first wave of the Omaha Beach invasion. The current head pastor at First Presbyterian Church said his father told how he heard bullets fly by him as he and his comrades in arms ran across the beach, only to see them fall while he kept running.

As he made it up the beach, Thomson said his father asked his sergeant if he could stop and clean his gun. It had been completely jammed by sand and water from the landing. The sergeant gave him the go-ahead, but took the rest of his unit to clear out a patch of German soldiers.

“They had left him there, and when they came back, they had lost more men on that move,” Thomson said.

Thomson and Bob Garrard have shared those stories they grew up hearing, those close calls of two men who were there to do their duty and were blessed to be able to make it out alive. It isn’t lost on either of them that they are alive today, sharing those stories and raising their families, because their fathers made it back home.

“We’re both lucky to even be here with what our dads went through,” Thomson said.

Thomson and his father made the trip to the beach he stormed in France for the 50th anniversary of the invasion. The beaches now, where people can easily walk up and down without fear of mortars or machine gun nests, are a far cry from what those men experienced.

“We walked along the beach together where he could figure out kind of where he landed and came ashore. It looked a lot different back then,” Thomson said. “We walked the beach and then among the graves of the men buried there. It just made me very proud of him for what he had done.”

Bob Garrard said years ago he and Holly Garrard took their granddaughter to the beach where his father had waded ashore, rifle in hand, bullets whizzing by his head, to help defeat the forces of fascism. He sent a video to Wes Garrard of his great-granddaughter playing on that beach he helped free, because he wanted his father to see what he and his fellow soldiers had helped accomplish.

“In the video, I said, ‘Dad, because you came up out of this water, your great-granddaughter can run into the water,'” Bob Garrard said. “When we go back and I hand that flag over, it will at least bring tears to my eyes and probably have them running down my face.