One of those participants is Bethany Sorenson from North Ogden, Utah. She writes many of her own songs and her very first one was written in a school setting.

“I was just sitting in my pre-calculus class and I was getting bored,” Sorenson said. “So I just started writing out some lyrics that I thought would be funny.

“I think I saw a pickup line on Pinterest and so I wrote down ‘if I rewrote the alphabet you and I would be together.'”

She then recalled a choir trip she went on and someone had a ukulele.

“And so I just was messing around with it,” Sorensen said. “Then I performed my song and people liked it so I just continued writing music.”

Sorensen says she released her first album last year. It is called Fly Away. She not only wrote the music, but she put other artistic talents to use designing the cover as well.

She’s also wrote some new songs recently as well. Just a few months ago Sorensen says she had a daughter. She says when she first found out she was pregnant her child was a the size of a poppy seed. So she recently released a song called “Poppy Seed”. 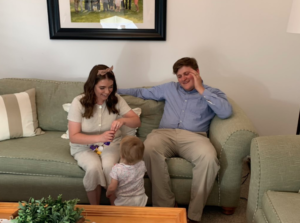 Within the last month she has released a piano arrangement of church hymns.