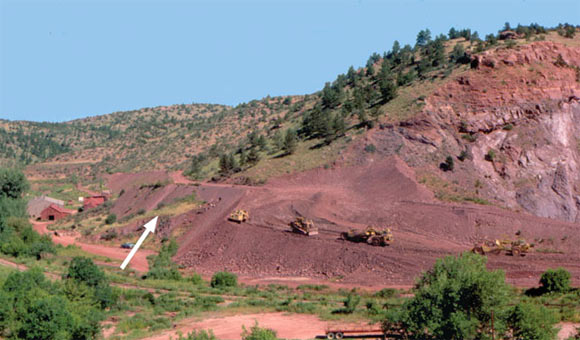 CASPER— Researchers from the University of Wyoming and Wyoming State Archeologists Office have confirmed that humans used an ancient red ocher mine in eastern Wyoming starting almost 13,000 years ago, making it the oldest documented red ocher mine — and probably the oldest mine in general — in North and South America.

The researchers published a paper with their findings last week.

The mine is part of the Powars II site in the town of Sunrise of Platte County.

The confirmation of the site’s significance comes after decades of work by archaeologists, including the famed UW professor George Frison, who started exploring the site in 1986 and was involved in research there until his death in September 2020.

The site is a trove of artifacts; researchers have also previously found objects like Clovis points as well as other projectile points, tools and shell beads. The research suggests that humans used the Powars II mine to make red ocher starting almost 13,000 years ago.

Humans used the quarry in two main periods. People quarried red ocher using bones and antlers as tools and also made and fixed weapons during the first period, which the researchers estimate started around 12,840 years ago and lasted a few hundred years.

After about a century of inactivity, humans again occupied the site to mine red ocher and left behind piles of artifacts in a quarry pit.

Paleoindian societies used red ocher for a variety of purposes; it’s been found in ancient graves, caches, campsites and kill sites in areas like the Great Plains and Rocky Mountains.

Wyoming state archaeologist Spencer Pelton, the lead author of the research paper, said he thinks people were attracted to the site because of the presence of red ocher and the ocher’s cultural importance.

“Red paint is the oldest form of symbolic expression,” he said. “But there’s just not much red pigment in America.”

The archaeologists used context to figure out the age of the site and its artifacts. To do that they had to find “in-situ” evidence, or artifacts left in the places where people had originally put them thousands of years ago. That was challenging at this site; many of the artifacts had moved, mostly because of erosion resulting from iron mining activity in the area (the town of Sunrise was a former company mining town).

In the future, Pelton said he hopes to figure out if other archeological sites have red ocher originating from the Powars II site. Researchers have already found red ocher from Powars II at Hell Gap, a site near Guernsey in eastern Wyoming, he said.

Pelton nominated the Powars II site to the National Register of Historic Places in 2021.