Kemmerer City Administrator Brian Muir updated a crowd of about 30 people at the South Lincoln County Training and Event center Tuesday, July 27, on the proposed nuclear power plant that Rocky Mountain Power and TerraPower are planning to build in one of four Wyoming communities. Kemmerer is one of the sites being considered, along with Rock Springs, Gillette and Glenrock.

Muir said two of the coal-fired power plants at the Viva Naughton plant south of Kemmerer could be shut down within the next five or six years, so a nuclear power plant could save the Kemmerer-Diamondville communities. Muir utilized a power point presentation to elaborate on why locating the plant near Kemmerer is the best option. He noted that both the Kemmerer and Diamondville mayors have written letters in support of the plant.

Muir said the city of Kemmerer had released a plan before Rocky Mountain Power’s proposal that suggested a nuclear power plant was a viable option for Kemmerer. Muir said the city wants to keep coal production going as well.  Muir also stated that the cities of Afton and Evanston have expressed their support for the nuclear plant. He said workers in the area already have experience in building big projects like the Williams plant at Opal.

Muir stated that Kemmerer has enough water capacity for a nuclear power plant, which would use less water than a coal-fired plant. There are several local concrete batch plants that can
supply enough material to construct the plant. He said Kemmerer and Diamondville are also ready in terms of housing in the area. Muir said up to 1500 construction workers
could be needed to build the plant. Muir also pointed out that Southwest Wyoming has several means of transportation in the area. That include railroads, a nearby Interstate
highway and airports. He said Kemmerer is closer to an international airport, at Salt Lake City, than any of the other proposed locations. Muir further state that Kemmerer-
Diamondville is in close proximity to skilled workers.

He said Kemmerer-Diamondville also offers several amenities, such as the South Lincoln Training and Events center, many recreational opportunities and retail shopping. Muir touted Kemmerer-
Diamondville’s superior schools and very low crime rate. Muir said having a nuclear power plant would also provide our youth with more good paying jobs here, so they wouldn’t have to leave the community.

As for the plant itself, Muir said nuclear power plants have proven to be very safe. He said the nuclear waste would by stored safely and securely at the site. Muir also gave each person attending some handouts with frequently asked questions about nuclear power plants. This information can also be found online at wyoadvancedenergy.com.

Muir lastly stated that he expected Rocky Mountain Power to make a decision on where to locate the nuclear power plant by this December. However, Wyoming Senate President Dan Dockstader (R-SD16), who was in attendance, said a decision could be made much sooner. 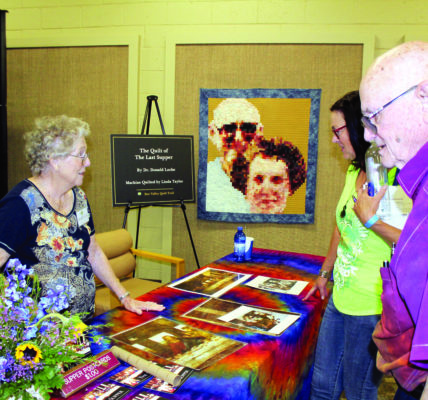