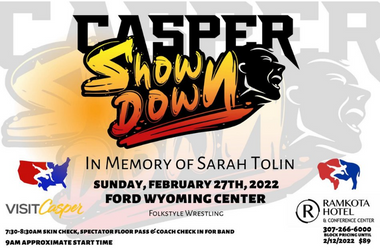 The 18th annual Casper Showdown Wrestling Tournament going down today in the Ford Wyoming Center is held in a special place by it’s orchestrator, Don Tolin, as it is being held in memory of his 2nd oldest daughter Sarah Tolin who was a pioneer in the state for Women’s wrestling;

“Well Sarah was an incredible athlete she also competed in Basketball, and Cross Country, and Track, and was also a letterman at Kelly Walsh High School — She was actually the first girl in Junior High in Casper to be allowed to wrestle on the team”

Sarah was an anomaly back in 1998 when she found a roster spot on the school’s wrestling team, in a time when women’s wrestling had not yet found its footing in the United States just yet. Her father Don recalls the scarcity of other girls across the nation that were doing what she was doing;

Sarah was permitted to wrestle on the boys team but only via petition each and every year as per the request made of her by the Wyoming High School Activities Association or WHSAA. She managed to gather enough support each year and found a space on the Kelly Walsh wrestling team and helped open the door to a new ruling by WSHAA that would permit the existence of mixed gender sporting teams in wrestling and football. Sarah’s wrestling accomplishments included being a 2 time Women’s Freestyle State Champion, a medalist at the Girls High School National Championships, and a High School All-American.

Sarah’s impact is still felt today not just in the tournament that bears her namesake, but now in the seemingly inevitable sanctioning of Women’s Wrestling as it’s own sport in the state of Wyoming at the High School level. Only 1 more school is needed to sign off on a Women’s Wrestling team in the state before the sport will become officially sanctioned. Don Tolin personally feels a bit of pride as does his family for this impact they believe Sarah had on this movement;

The Casper Showdown began today at 9am.