Season to Kick Off Sept. 4 Versus Montana State and Will Feature a Full 12-Game Schedule

Laramie, Wyo. (March 5, 2021) — A full slate of 12 games is on tap for the Wyoming Cowboys in 2021 as the Mountain West Conference released the conference schedule on Friday.  Wyoming will open its season on Saturday, Sept. 4 at home versus Montana State.

Friday’s schedule announcement completed the first phase of the 2021 Mountain West football scheduling process.  Televised games, game times and potential moves of some games to Fridays will be announced by the Mountain West at future dates.

∙Season-ticket renewals are currently available for the 2021 Wyoming Football season.  Season-ticket packages start at $159 for adults and $89 for children ages 3-12 years old.

∙New season tickets will go on sale on April 1.

∙More details on season-ticket sales are available online at www.GoWyo.com/tickets.  Fans may also call (307) 766-7220 regarding season-tickets.

∙Season-ticket holders will have the option to receive their tickets and parking passes via print at home or mobile delivery at the time of purchase. 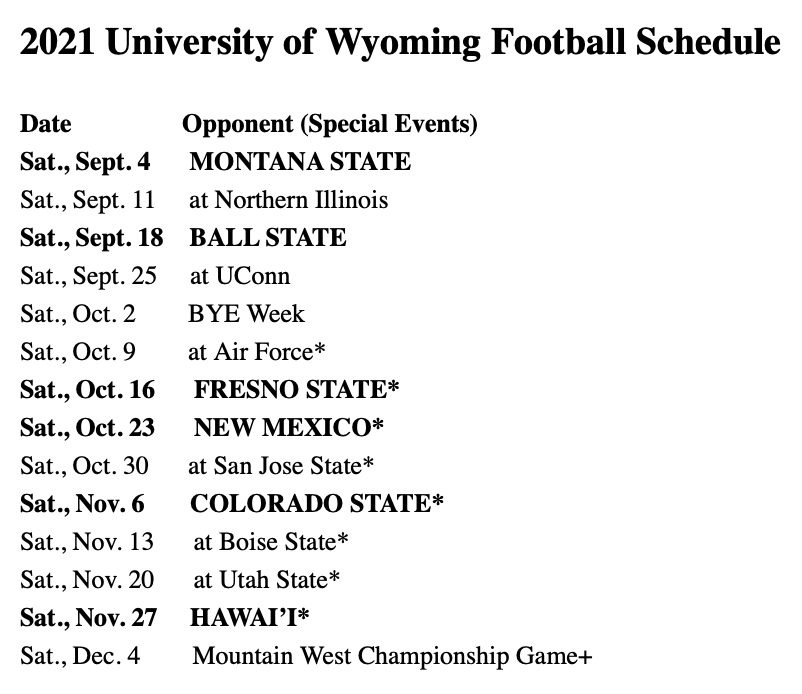 +The Mountain West Football Championship Game will be played at the home stadium of one of the divisional champions based on the current MW policy in place to determine the host team.

Season Will Begin With a Matchup vs. Montana State and Former Cowboy Coach Brent Vigen

The 2021 season opener will be against an old regional rival, the Montana State Bobcats.  It will be the first time since 2003 that the two teams have met in football.  The unique facet of this year’s game will be that Montana State will be led by new head coach Brent Vigen, who for the past seven seasons served as Wyoming’s Associate Head Coach and Offensive Coordinator.

The 2021 Season Will be the 125th Season of Wyoming Football

The 113th Edition of the “The Border War” to be Played Nov. 6 in Laramie

This year will mark the 113th Edition of “The Border War” between Wyoming and Colorado State.  The series began in 1899 and has been played in three different centuries.  The 2021 meeting will mark the 76th consecutive season the two teams have played since the end of World War II.  The two teams will compete for “The Bronze Boot” traveling trophy for the 54th time since the trophy was introduced in 1968.

About the 2021 Cowboy Football Team

With the NCAA granting student-athletes an extra year of eligibility due to the COVID shortened 2020 season, Wyoming, like many other FBS teams, will return a very deep and veteran roster in 2021.  Here are some notes on the 2021 Wyoming Cowboys.

Returning Starting Experience:  Wyoming will return 22 of 24 starters from the 2020 season.  In terms of returning Cowboys with starting experience at some time during their college careers, UW has 21 players on offense and 20 players on defense who have started in their Wyoming careers.

Wyoming Defense:  The Cowboys return all 11 starters from a defense that ranked No. 16 in the nation in total defense in 2020 and ranked in the Top 30 in the nation in 10 defensive categories.

Wyoming Offense:  UW returns 10 starters from an offense that ranked No. 14 in the Football Bowl Subdivision in rushing offense and ranked in the Top 35 in the nation in six offensive categories.

Xazavian Valladay:  Junior running back Xazavian Valladay has led the Mountain West in rushing in each of the past two seasons and earned First Team All-Mountain West honors both years.  He ranked No. 17 in the nation in rushing in 2020 and No. 18 in 2019.  He was named to the 2020 Doak Walker Award Watch List (Nation’s Top Running Back) and the 2020 Maxwell Award Watch List (Nation’s Most Outstanding Player).

Chad Muma:  Junior linebacker ranked No. 1 in the Mountain West and No. 3 in the nation in tackles in 2020 and earned First Team All-Mountain West Conference honors.

John Hoyland:  The freshman place-kicker ranked No. 1 in the nation in field goals made per game in 2020.  He was named to the Football Writers Association of America First Team Freshman All-America Team and earned Second Team All-Mountain West honors.

Uinta County Opens COVID Vaccines to Anyone Age 18 and Older