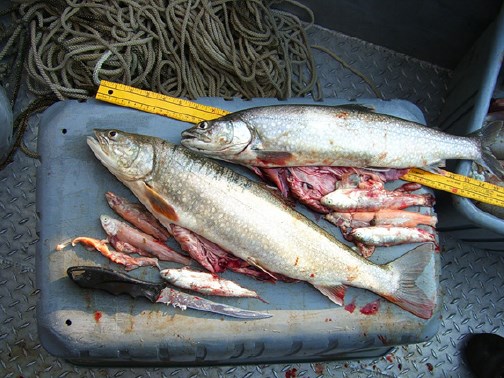 CODY — Yellowstone National Park is still the king of lake trout slayers in Yellowstone Lake as officials keep up the relentless pressure on the invasive species in attempts to save cutthroat trout.

During the May-October annual period where the National Park Service and contractor partners attempt to kill and remove the predator to preserve the smaller native species, 282,960 fish were eliminated.

While by most standards that is a huge number of lake trout and millions have been removed, it represents a smaller recent annual total, something that can be viewed as tide-turning.

The Park Service has been battling the voracious lake trout so the popular and native cutthroat can survive in the 87,040-acre lake.

The park has placed an urgent priority at a cost of about $2 million per year to try to restore some balance to the situation.

“The park will never completely eradicate lake trout,” said Todd Koel, chief of the Native Fish Conservation Program for Yellowstone, “But the return on investment is the ecological restoration of Yellowstone cutthroat trout, sustainable angling, and a chance to glimpse a river otter, osprey or bear catching a cutthroat.”

Studies indicate the size of lake trout being caught in gillnets and removed from Yellowstone Lake has declined since efforts were ramped up in this removal project in 2011.

The Park Service worked with Michigan State University and estimated from survey results there are 73 percent fewer lake trout that are 6 years old and older than 8.

Koel, a close observer of the trends, and superintendent Cam Sholly recognize much progress has been made in an uphill struggle, but more must be invested to prevent a lake trout bounceback.

“I want to personally thank the National Park Service team, our partners, and the many people who have philanthropically supported this continuing conservation effort,” Sholly said.

“There is a considerable amount of work yet to do to build on this progress. This will continue to be one of our conservation priorities.”